This is a submitted sponsored story. CCN urges readers to conduct their own research with due diligence into the company, product or service mentioned in the content below.

Ever since Ethereum launched in July 2015 it has been hugely popular for investors and cryptocurrency enthusiasts. In truth, even before the crypto was introduced to the market, interest in the project had been high.

In November 2013 the Russian-Canadian programmer Vitalik Buterin published a white paper on Ethereum, setting out his vision for a programming language that could deliver extraordinary functionality to the blockchain beyond mere currency transactions.

Earlier that year he had travelled to Israel and worked with global investing and trading platform eToro to develop Coloured Coins, an open-source banking infrastructure for the future of digital money. It was during this trip that the youngster – who was introduced to Bitcoin, when aged 17, by his father in 2011 –  firmed up his ambition to invent Ethereum.

Ethereum, or the ‘Ethereum Virtual Machine’ – which managed to raise almost $20 million in July and August 2014 – was built as a decentralised computer network on top of which software developers could program any platform, and the network is fuelled by ‘Ether’ (or ETH). For many in the cryptocurrency world, the launch of Ethereum was the most exciting development since Bitcoin, the founding crypto, was introduced in 2009.

It did not take long for Ether to be established as the second-biggest in terms of market capitalisation. Ethereum is only behind Bitcoin, the founding crypto that was launched, in that regard. When Ether was introduced, in July 2015, it was valued at $2.8 per token. By March of the following year it had hit $10, and as transactions on the Ethereum blockchain skyrocketed a raft of top organisations begin backing the crypto.

The United Nations, Toyota, Deloitte, Samsung, and many others sought to take advantage of its enormously powerful shared global infrastructure. Before long its price reached $300, and Ether’s value peaked at $1,315 in January 2018.

There are many similarities between Ether and Bitcoin. First, they are both blockchain-based cryptocurrencies and can be mined by users around the world. There are some key differences, however. While the annual supply of Ether is limited to 18 million, Ethereum could theoretically continue to introduce new currency and make its supply unlimited. Conversely, Bitcoin’s supply is capped at 21 million – that mark is due to be reached in the year 2140.

Another big difference is the processing speed; Bitcoin transactions take around 10 minutes, whereas an Ether transaction takes only 15 seconds.

While Olaf Carlson-Wee, Founder and CEO of Polychain Capital, has predicted that “Ethereum’s price could surpass that of Bitcoin by the end of 2018” and Monkey Capital’s Daniel Mark Harrison reckons it will “likely be valued at over $100,000 by 2042” others are more cautious. Luis Cuende, co-founder of Ethereum-powered company Aragon, says: “Ethereum’s price will hit $1,000 by mid-2019.”

Ethereum, which hit a high of $1,315 per coin in January 2018, is one of a number of top cryptos available to trade and/or buy outright on global trading and investment platform eToro.

Their motto is “Cryptos Needn’t Be Cryptic” and the team has produced a useful short education video to help investors seeking more information about Ethereum.

Pros and cons of trading on eToro

•Instant execution of trades, thereby locking in a price

•Ability to use CopyTrader and other innovative tools

•Huge cryptocurrency community that shares knowledge and helps each other

•Only nine cryptocurrencies offered by the platform, currently

•Users are unable to withdraw the cryptocurrencies directly

•Users’ cryptocurrencies are held by eToro

Trading Ethereum is straightforward on eToro

Step 1: Go to www.etoro.com and press ‘Join Now’ to register 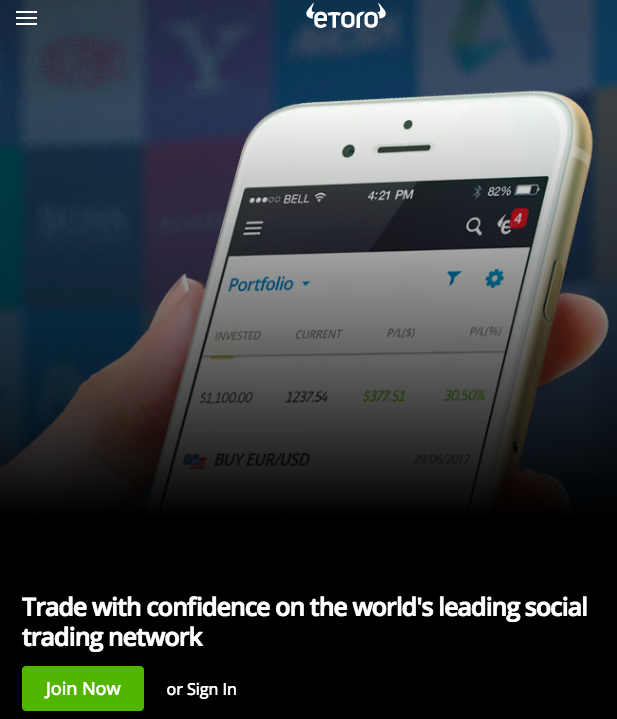 Step 2: Once you have signed up, search for Ethereum

Step 4: Choose either the amount or units to trade (by toggling the icon in the right-hand side) and press ‘Deposit Now’

Want to learn more about trading Ethereum and other cryptos? Visit www.eToro.com now, and join the online global community.

All trading involves risk. Only risk capital you’re prepared to lose. Past performance is not an indication of future results.